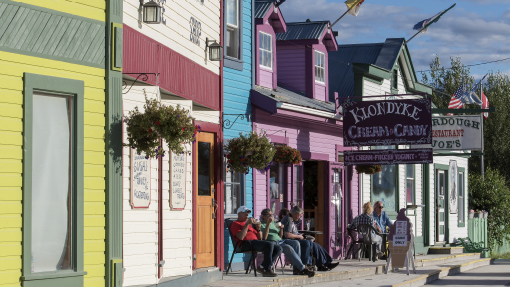 The Klondike Visitors Association is a not-for-profit tourism sector organization, based in Dawson City, Yukon, representing local and regional members and industry stakeholders. Our mandate includes destination marketing, operation of attractions, and presentation of special events that increase visitation and add to the quality of life in our community.

Learn more about the KVA’s role and vision for Dawson City and the Klondike Region below. 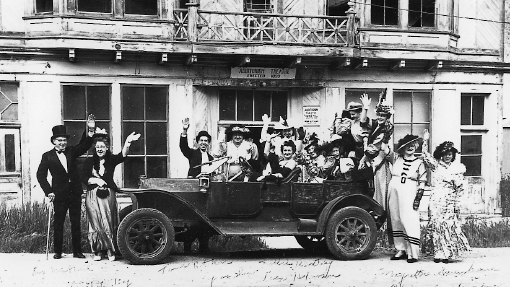 The Klondike Visitors Association was born in 1952 when a group of enthusiastic Dawson City residents decided to dress up in Gold Rush-era costumes and greet a group of visitors arriving from Whitehorse on an old paddle-wheeler. Their welcome was so well-received that they continued with their colorful greetings, and soon organized themselves into the Klondike Tourist Bureau. They began giving tours of the town and goldfields and hosting “Klondike Nights” at the Palace Grand Theatre. The proceeds from the Klondike Nights were used to create the first tourism pamphlets in the Yukon.

In 1960 the group changed its name to the Klondike Visitors Association and continued to develop its role in Dawson City as a leader and steward of tourism in Dawson City and the Klondike Region. Today the KVA operates and maintains various holdings, including the infamous Diamond Tooth Gerties, a non-profit casino, holds exciting and uniquely Klondike events, such as the Great Klondike International Outhouse Race, and supports local organizations with resources such as the KVA Community Events Casino and  KVA grants!